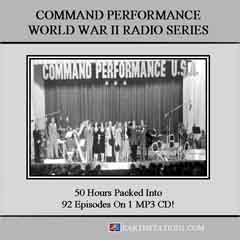 Command Performance was a radio program that lightened the hearts of everyone touched by the ravages of World War II.  This series of old radio shows began airing in March of 1942 and lasted for two years until 1946.  Each episode consisted of 30-minutes of non-stop action and entertainment, featuring the biggest and brightest stars in Hollywood.

Command Performance was produced by the War Department to be broadcast to the troops the show was described as “so important and expensive that only Uncle Sam is big enough to sponsor it.” Despite the fact that this particular old time radio show was expensive to produce, there was never a lack of sponsors as even civilians across America helped contribute to this war effort. The likes of CBS and NBC donated free studio use to the program and big name stars from across America provided their talents on the air.