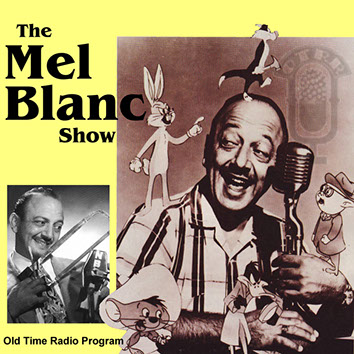 Melvin Jerome “Mel” Blanc was an American voice actor and comedian. Although he began his nearly six-decade-long career performing in radio commercials, Blanc is best remembered for his work with Warner Bros. during the so-called “Golden Age of American animation” (and later for Hanna-Barbera television productions) as the voice of such well-known characters as Bugs Bunny, Daffy Duck, Porky Pig, Sylvester the Cat, Tweety Bird, Foghorn Leghorn, Yosemite Sam, Wile E. Coyote, Woody Woodpecker, Barney Rubble, Mr. Spacely, Speed Buggy, Captain Caveman, Heathcliff, and hundreds of others. Having earned the nickname “The Man of a Thousand Voices,”

Blanc is regarded as one of the most influential people in the voice-acting industry.

Blanc’s success on The Jack Benny Program led to his own radio show on the CBS Radio Network, The Mel Blanc Show, which ran from September 3, 1946, to June 24, 1947. Blanc played himself as the hapless owner of a fix-it shop, as well as his young cousin Zookie (who sounded quite a bit like Porky Pig). Many episodes required Mel to impersonate an exotic foreigner or other stranger in town, ostensibly for carrying out a minor deception on his girlfriend’s father, but of course simply as a vehicle for him to show off his talents.